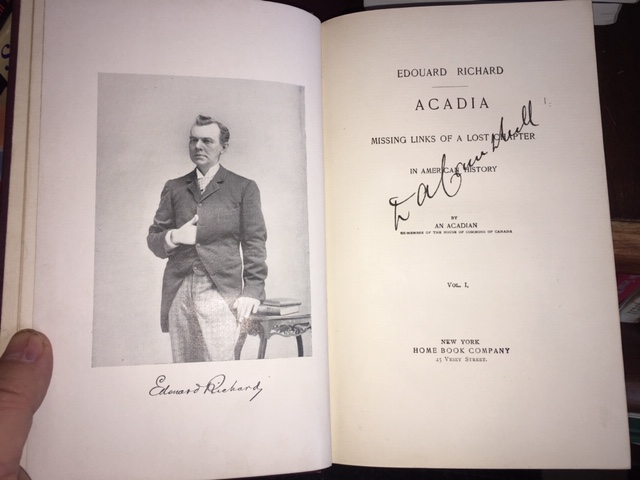 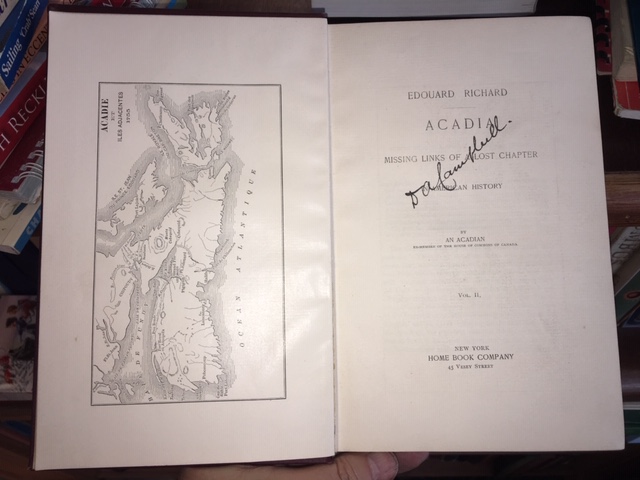 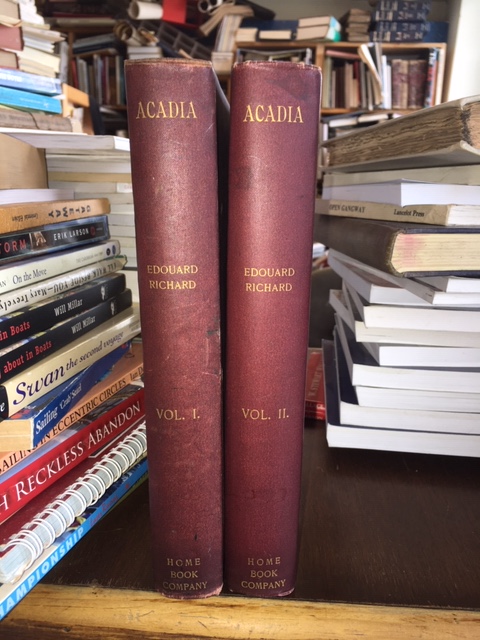 Strangley not in Watters or Maillet.

A chronological survey of the history of the French presence in Acadia, dating from the settlement of Port Royal, written by a descendant of the Acadians. Richard's goal in this volume is to clear up some of the misconceptions regarding Acadian history, and to fill in holes in the literature that had been glossed over.

"The whole of my childhood was spent in the midst of an Acadian settlement. Then were still alive the sons of those who had been deported, facts were still fresh in their memories, and each family could reconstruct the series of its misfortunes from the time it left Grand Pré, Beaubassin or Port Royal till its final settlement in Canada. (I still have by me an aged uncle - Raphael Richard - who remembers very distinctly having heard his grandfather relate the incidents of theh deportation, of which he had been himself a victim at the age of eleven."


2. Surrender of Port Royal, Oct. 13th, 1710 -
Articles of the Capitulation -
Cession of Port Royal with the Territory within "cannonshot" -

Battle of "Bloody Creek" -
Port Royal Besieged -
The Acadians of the Ceded Territory Withdraw -
The Garrison is Reinforced and the Projected Siege is Abandoned.


3. Treaty of Utrecht -
Cession of Acadia -
Clauses of the Treaty and Letter of Queen Anne -
Lieutenant-Governor Vetch Opposes the Departure of the Acadians -

Artifices of the Compiler, his Partiality, etc.


4. Lieutenant-Governor Canfield -
He Sends Peter Capoon and Thomas Button to have the Acadians take the Oath of Allegiance -


5. Administration of Philipps (1720-1722) -
Taking the Required Oath of Allegiance or Departure within four months without carrying away anything -
Decision to Depart -
Disappointment of Philipps -
New Omissions of the Compiler -
The Acadians undertake to open a road in order to effectuate their departure -

Philipps orders the Suspension of the works -
Prolongation of the Delay -
Cajoleries to keep back the Acadians -
Important Letter of the Secretary of State Craggs -
Parkman.

Doucette resumes his Functions as lieutenant-governor, which he exercises till 1725 - Total Absence in the volume of the Archives of documents for this period -

Armstrong succeeds him -
His Character -
Taking of the Oath at Annapolis -
Captain Bennett and Phillips make the tour of the province for the same purpose -
Their failure -
Armstrong confides the same mission to Officer Worth -
Incomplete success -
His report.

A total of 45 chapters and 4 appendices.

Some faint soiling to boards, a couple of horizontal blisters to the rear board of the first volume, some wear to spine ends and extremities, previous owner's name inked across the text of both title pages, else very good. For the set. NOTE: Some extra shipping will be required for this heavy set. 250.00