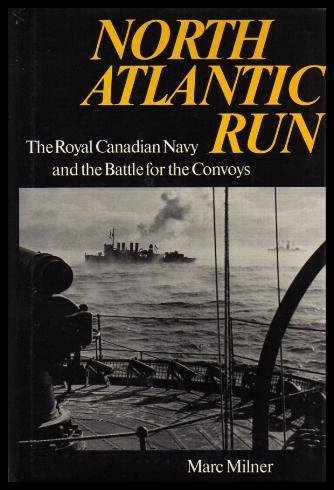 North Atlantic Run : The Royal Canadian Navy and the Battle for the Convoys. 3rd Printing in dustjacket

"In a stretch of the North Atlantic known as the Black Pit, far from land-based air cover, escorted convoys travelling the main trade routes between Newfoundland and Ireland were regularly besieged by marauding U-boats in classic naval confrontations.

The Royal Canadian Navy's escort operations proved to be one of Canada's most important contributions to Allied victory in the Second World War. They were also one of the most controversial. The story of those operations and of Canada's wartime navy is now told in full detail for the first time.

Milner focuses primarily on the series of bitter and tragic battles fought by the RCN in the mid-Atlantic during the latter half of 1942. Events of those six months constituted the crisis of Canada's naval war. The fall-out from this crisis, its impact on the operational deployment of the fleet, and the violent upheaval it caused in Ottawa are key parts of the story. The drama at sea was played out against a backdrop of bitter controversy at home, as the navy struggled to balance its operational commitments with the urgent need to confront and defeat a deadly enemy.

North Atlantic Run fills an important gap in the historiography of wartime Canada and the war at sea, and finally portrays both Canada and the RCN, for better or worse, as dynamic elements in the struggle for the convoys." - from the dj.

Contents:
Foreword by Vice-Admiral Sir Peter Gretton;
Preface;
Prologue;
1. The Road to the Isles;
2. The Struggle Begins;
3. Between a Rock and a Hard Place;
4. New Priorities and a Certain Balance;
5. An Acceptable Rule of Exchange;
6. The Disquiet Grows;
7. The Reckoning;
8. The View from the Sidelines;
9. Summer of Discontent;
Epilogue.
Appendices: 1. A Selective Summary of Principal Staff Appointments and the Officers Who Held Them, 1941-3;
2. Summary of C and A3 Group Compositions, July 1942 - May 1943.
With notes, bibliography and index.

Title: North Atlantic Run : The Royal Canadian Navy and the Battle for the Convoys. 3rd Printing in dustjacket

North Atlantic Run : The Royal Canadian Navy and the Battle for the Convoys. 3rd Printing in dustjacket