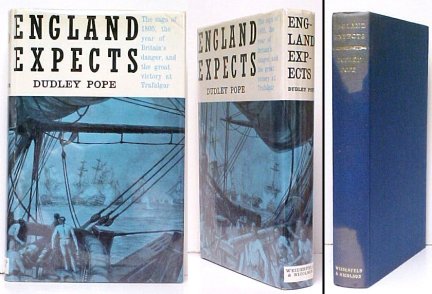 POPE, Dudley. Corsair: a novel. L: Secker & Warburg, (1987). First UK Edition. Pp 193. 8vo, blue cloth. The third Pope novel to feature the figure of Ned Yorke, Admiral of the Brethren of the Coast, a buccaneer whose freedom is threatened equally by Spanish marauders and by the suspicious English governor of Jamaica. Remainder mark to bottom edge, else vg in dj. 60.00 View more info 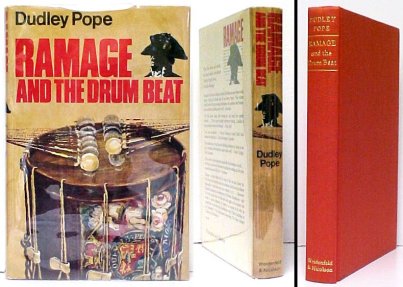 Ramage and the Drum Beat. 1st UK in dj 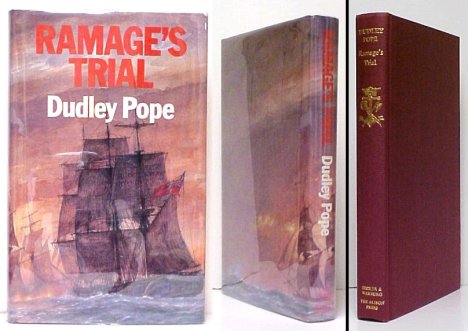 Devil Himself : The Mutiny of 1800. First Edition in dustjacket

POPE, Dudley. The Devil Himself : The Mutiny of 1800. London: Secker & Warburg, (1987). First UK Edition. Pp 185. Map. 8vo, brown cloth. "The corvetteLa Vaillante was built in Bayonne in 1796, four years after the outbreak o f the French Revolutionary Wars. In 1798 she was captured by Captain Sir Edward Pellew, renamed the Danae and given a new young captain, Lord Proby. In March 1800, there was consternation in London when The Times reported theFrench recapture of the Danae following a mutiny among her crew." - from t he dj. Vg-fine in price-clipped dj. 60.00 View more info

73 North : The Battle of the Barents Sea.. UK reissue in dj

POPE, Dudley. 73 North : The Battle of the Barents Sea. With a Foreword by Admiral of the Fleet Lord Tovey. L.: Secker & Warburg, (1988). Reissue. Pp 320. Illustrated. 8vo, red cloth. Law 0511 "When a German U-Boat spotted the Allied convoy on the Arctic Route to Russia a message was immediately relayed to the battleships Lützow and Hipper and six large destroyers. They were to annihilate it. Captain Vincent Sherbrooke RN had only four destroyersin his escort and found himself against overwhelming odds." - from the dj. Vg-fine in dj. 25.00 View more info

Decision at Trafalgar. 1st US in dj

Graf Spee : The Life and Death of a Raider. First American Edition in dustjacket

POPE, Dudley. Graf Spee : The Life and Death of a Raider. Philadelphia: J. B. Lippincott Company, 1957. First US Edition. Pp (6),vii-xviii,19-256 + [16] pp of plates. 8vo, blue cloth spine with blue paper covered boards. Law 0113. "Here for the first time, is the full account of the operations and destruction of the ship that was the pride of the German navy." -from the dust jacket. Foreword by Admiral Sir Edward Parry; Preface by Admiral Sir Charles Woodhouse. Heavy browning to pages xii and xiii from presence of newspaper clippings, else vg chipped and unclipped dustjacket with sever... View more info

Ramage and the Rebels. in dj.

POPE, Dudley. Ramage and the Rebels . A novel. London: Alison Press / Secker and Warburg, (1978). First UK Printing. Pp. (8),1-285,(3). 8vo, black cloth with gilt lettering to spine. "The War against revolutionary France is goind badly and Lord Ramage, the most junior Post Captain in the Navy List, has been ordered from the Leeward station to the Jamaica station in his frigate, the Calypso. The Vice-Admiral's first orders seem both boring and difficult: he is to chase and capture French, Spanish and Dutch privateers along the coast of the Spanish Main. Two days out of Port Royal the crew o... View more info

Ramage and the Renegades. First Edition in dustjacket, Signed

POPE, Dudley. Ramage and the Renegades. London : Secker and Warburg; An Alison Press Book, (1981). First UK Printing. Pp. (8),1-291,(5). 8vo, brown cloth with gilt lettering to spine. "Captain Lord Ramage, just returned from bitter fighting in the Mediterranean, is enjoying leave with his parents in London while the frigate Calypso is refitted. Suddenly news of Bonaparte's latest coup is revealed: Britain and France have signed the Treaty of Amiens. After eight years of bloody war, the world is now at peace - and the Navy in peacetime has nothing to offer an adventurous young... View more info

POPE, Dudley. Ramage's Signal:. A novel. London: Secker and Warburg; An Alison Press Book, (1980). First UK Printing. Pp. (8),1-256. 8vo, maroon clothwith gilt lettering to spine. "The French expect an occasional daring Brit ihs privateer or Algerine pirate from the Barbary Coast to sneak along in search of a small merchant ship, but they have no idea that Ramage and his regular crew (including the Cockney seaman Stafford, the Italian Rossi and the American Jackson, along with the young midshipman Orsini) have slipped into Homer's 'wine dark sea', where Ramage quickly spots the French jugu... View more info

POPE, Dudley. Convoy : A Novel. London : Alison Press / Secker & Warburg, (1979). First UK Printing. Pp. [1]-335,(1). 8vo, red cloth with gilt lettering to spine. "The Admiralty is trying to discover how German U-boats evade the Royal navy escort ships to attack and sink merchant ships from inside convoys. Yorke gets the job of finding out. He soon decides the only way is to go to sea with one of the threatened convoys. His mission is unique but,afloat once again, Yorke swiftly discovers that the fate of the whole conv oy, and his own survival, depends on his daring and quickness of wit, t... View more info

POPE, Dudley. At 12 Mr Byng was shot.... London: Weidenfeld and Nicolson, (1962). First UPrinting. Pp 338. Illustrated. 8vo, blue cloth with gilt lettering to spine. "The trial and execution of Admiral the Hon. John Byng was one of the most coldblooded and cynical acts of judicial murder in all British history." - page xi. Small bump to spine (just below gilt name), previous owner's name, else vg in price-clipped dj. 80.00 View more info

73 North: The Battle of the Barents Sea

POPE, Dudley. 73 North: The Battle of the Barents Sea. Ithaca, N.Y.: McBooks Press, (2005). First printing of this edition. Pp. (i)-xvii,[1],1-317,[1]. Illustrated. 8vo, illustrated card covers. "Pope brings together the events and decisions that culminated in this pivotal confrontation in which eight of the German Navy's most powerful ships failed to sink a Russian convoyguarded by only four small British destroyers. When news of the defeat rea ched Hitler, he became so incensed he ordered the German Fleet scrapped. InPope's hands, this story is not merely one of governments and over-arch... View more info