Christianity and Bertrand Russell : A Critique of the essay Why I Am Not A Christian. First Edition.

(RUSSELL, Bertrand). CLARK, C.H. Douglas. Christianity and Bertrand Russell: A Critique of the essay "Why I Am Not A Christian". London: Lutterworth Press, (1958). First Printing. Pp. (6),7-78,(2). 8vo, printed pink wraps with black lettering to front cover and spine, French flaps. "Bertrand Russell is a prominent critic of the Christian faith and has stated his inabilityto believe in Christianity in his essay 'Why I Am Not A Christian'. In thi s booklet Dr. Douglas Clark examines the main contentions of Bertrand Russell and gives concise replies. Point by point Dr. Clark takes up ... View more info 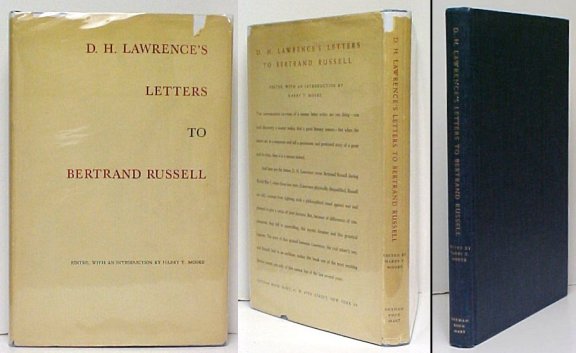 LAWRENCE, D. H. D. H. Lawrence's Letters to Bertrand Russell. Edited with an introduction by Harry T. Moore. New York : Gotham Book Mart, 1948. First US Edition. Pp. 111 + 2 p. of plates. 8vo, navy blue cloth with gilt lettering to spine, top edge dyed red. Roberts & Poplawski, A Bibliography of D.H. Lawrence (3rd ed.) A84. This first edition, designed by Maurice Serle Kaplan, is limited to 950 copies. An essay on the relations between Lawrence and Russell in the early part of the twentieth century, as well as a brief selection of their correspondences. Name, sporadic pencilling to margins, el... View more info

We Accuse : A Powerful statement of the new political anger in America, asrevealed in the speeches given at the 36-hour Vietnam Day protest in Berke ley, California. 1st pbk.

From The Third Programme: A Ten-Years' Anthology

MORRIS, John, editor. From The Third Programme: A Ten-Years' Anthology. London : Nonesuch Press, 1956. Pp (4),v-x,(2),3-339,(3) . 8vo, red cloth. "TheThird Programme is one of the cultural triumphs of this country. It seeks no 'best-seller' status, offers poetry and philosophy and aesthetic experience and difficult discussion without compromise, and yet is a voice crying in a wilderness so well-populated that 1,600,000 people listen to it at least once a week." Arranged in four sections: Imagination, Argument, Experience and Exposition. Imagination: James Kirkup's "The Descent into... View more info

Practice and Theory of Bolshevism. 2nd Edition in dustjacket 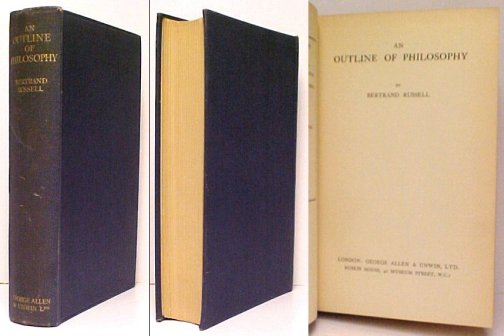 Why Men Fight. 1st US no dj

RUSSELL, Bertrand. German Soocial Democracy. London : George Allen and Unwin Ltd, (1965). First Edition Thus. Pp (6),vii-xii,[1]-184. 8vo, b;ue c;loth, gilt lettering to spine. A New Edition of his First Book. A few dog-earedpages, else very good in spine-browned, unclipped dustjacket. 50.00 "This book is the first that Earl Russell ever wrote, and was based upon a seriesof lectures delivered at the London 5chool of Economics in 1896. Since the n much has happened and much has changed. When the book was first produced the Kaiser was in his glory: he and his government were bitterly hostile... View more info

RUSSELL, Bertrand. The Principles of Mathematics. London : George Allen & Unwin, (1950). Second Edition, Fifth Impression. Pp 534. 8vo, blue cloth, gilt to spine. "The Principles of mathematics, first published in 1903, sets forth, as far as possible without mathematical of logic symbolism, the grounds in favour of the view that mathematics and logic are identical, what iscommonly called mathematics being merely later deductions from logical pre misses. The detailed proof of this thesis was subsequently given by Professor Whitehead and the present author in Principia Mathematica; in the &#... View more info

Analysis of Mind. No dj

ABC of Atoms. No dj

Amberley Papers : The Letters and Diaries of Lord and Lady Amberley. in twovolumes. First edition

By: RUSSELL, Bertrand and Patricia (eds.)

Publisher: Leonard and Virginia Woolf at the Hogarth Press, London, 1937,:

RUSSELL, Bertrand and Patricia (eds.). The Amberley Papers : The Letters and Diaries of Lord and Lady Amberley. [In Two Volumes]. London : Published by Leonard and Virginia Woolf at the Hogarth Press, 1937. First Edition. Pp (4),5-552, frontispiece + 11 plates; (6),7-581,(3),+ 8 plates. Index to each volume. 8vo, green cloth, spine lettered in black. John Russell, ViscountAmberley (1842-1876), was a British politician and writer. He was the elde st son of John Russell, who twice served as Prime Minister of the United Kingdom, and father of the philosopher Bertrand Russell. Amberley is known fo... View more info 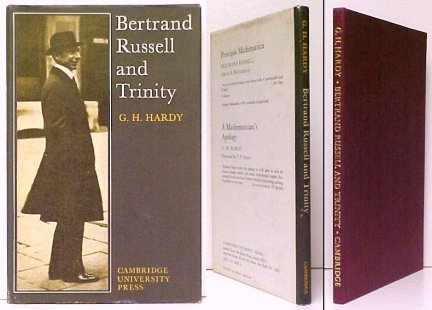 Bertrand Russell and Trinity. : A facsimile reproduction, with a foreword by C. D. Broad

(RUSSELL, Bertrand) HARDY, G. H. Bertrand Russell and Trinity : A facsimilereproduction, with a foreword by C. D. Broad. Cambridge : At the Universit y Press, 1970. Pp. 61. 8vo, maroon cloth with gilt lettering to spine. A background of the incident that led to Bertrand Russell's dismissal as a lecturer at Trinity College, Cambridge, in 1916. Name to flyleaf, else very good in dustjacket. 60.00 View more info

RUSSELL, Bertrand. The Problems of Philosophy. New York : A Galaxy Book, Oxford University Press, 1959. Pp [1]-167,(1). Index. 8vo, card covers. Bertrand Arthur William Russell, 3rd Earl Russell, (1872-1970) was a British philosopher, logician, mathematician, historian, socialist, pacifist and social critic. Although he spent most of his life in England, he was born in Wales, where he also died. George Parkin Grant (1918-1988) was a Canadian philosopher, teacher and political commentator, whose popular appeal peaked in the late 1960s and 1970s. He is best known for his nationalism, political c... View more info

RUSSELL, Bertrand. Philosophy and Politics. London : published for the National Book League by the Cambridge University Press, 1947. First Printing. Pp. (6),7-29,(3). 8vo, navy blue cloth with gilt lettering to front board, blank spine. National Book League Fourth Annual Lecture. "It is an analysis of the influence of philosophical thought upon political behaviour from Plato to Karl Marx. The author examines with clarity and withering wit the confusion of thought that breeds totalitarian dogma, whether of the Right or the Left, and eloquently affirms the 'liberal empiricism' upon which wes... View more info

Why I am Not a Christian and Other Essays on Religion and Related Subjects.First Edition without dustjacket.

RUSSELL, Bertrand. Why I am Not a Christian and Other Essays on Religion and Related Subjects. Edited with an Appendix on the Bertrand Russell Case byPaul Edwards. London: George Allen & Unwin Ltd., (1957). First Printing. P p. (4),v-xiii,(3),1-225,(3). 8vo, rust cloth with silver lettering to spine. Contents: 1. Why I am not a Christian; 2. Has Religion Made Useful Contributions to Civilization?; 3. What I Believe; 4. Do We Survive Death?; 5. Seems, Madam? Nay, it is; 6. On Catholic and Protestant Sceptics; 7. Life in the Middle Ages; 8. The Fate of Thomas Paine; 9. Nice People; 10. The New G... View more info

Mutual Influences and Polemics between Russell and Wittgenstein. First Edition