BURNETT, Constance Buel. Captain John Ericsson : Father of the Monitor. NewYork : The Vanguard Press, Inc., (1960). Second Printing. Pp. (8),[9]-255, (1). 8vo, blue cloth with silver and red decoration to front board, silver and red lettering to spine. "This is the first biography for young people of the Swedish-American genius who invented the Monitor - the revolutionary ironclad warship that, at the very moment Lincoln was considering evacuating Washington during the Civil War, turned the tide of battle for the North in the historic duel with the Merrimac. But the Monitor was only one of...
View More...

First Saratoga: Being the Saga of John Young and His Sloop-of-War. . in dj.

CLARK, William Bell. The First Saratoga: Being the Saga of John Young and His Sloop-of-War. Baton Rouge: Louisiana State University Press, (1953). Pp 199. 8vo, blue cloth. An early revisionist account of the career of one of the United States' earliest, and the author contends most distinguished, naval officers. "During the American Revolution, the Saratoga played a significant role in stemming the flow of supplies to British forces. Sailing out of Delaware River ports on her three cruises, she engaged heavily armed British vessels in spectacularly successful encounters, capturing 12 prize...
View More...

Du Pont : The Making of an Admiral : A Biography of Samuel Francis Du Pont.First Edition in dustjacket 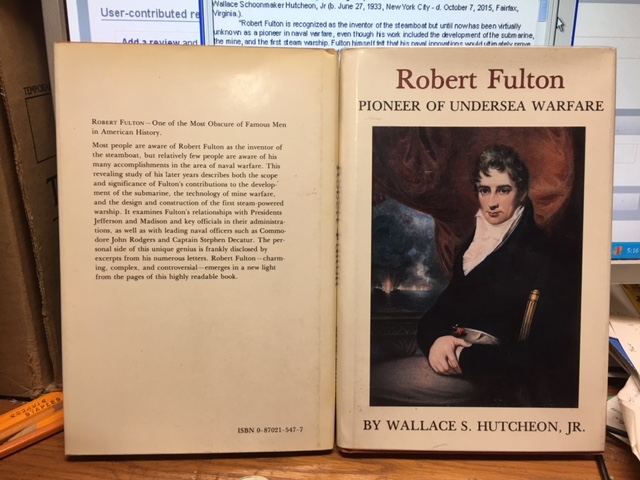 "Robert Fulton is recognized as the inventor of the steamboat but until now has been virtually unknown as a pioneer in naval warfare, even though his work included the development of the submarine, t...
View More...

(HALSEY, William F.). POTTER, E.B. Bull Halsey. A biography by E.B. Potter.Annapolis, MD : Naval Institute Press, (1988). Second Printing. Pp. (10),x i-xiii,(3),[1]-421,(3). Illustrated. Map endpapers. 8vo, grey cloth with blue lettering to spine. "Applauded by the public and revered by the men who served under him, Admiral William F. Halsey was one of the great American personalities of World War II. His reputation as a no-holds-barred fighter and his tough-guy expression earned him the nickname Bull, yet he was also known for showing genuine compassion towards his men. As this well-round...
View More...

HENDERSON, Daniel. The Hidden Coasts : A Biography of Admiral Charles Wilkes. New York : William Sloane Associates, 1953. Pp 306. 8vo, blue cloth spine. "Wilkes was a man who truly made history. In 1838 he sailed in command of the United States Exploring Expedition on what was to become one of the greatest voyages of exploration since the days of Captain Cook. With courageand perseverance, Wilkes and his men raced British and French ships to est ablish the existence of the Antarctic Continent." - from the dj. With bibliography and index. Very good in chipped dustjacket. 45.00
View More...

John Paul Jones: Fighter for Freedom and Glory . 2nd US in dustjacket. 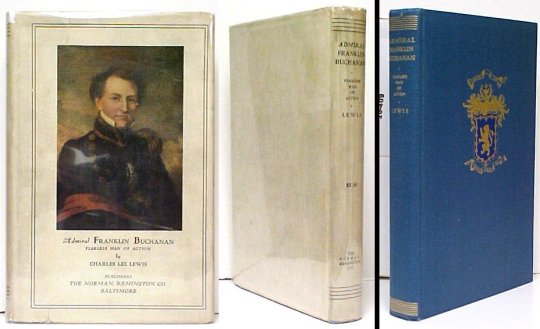 On Franklin Buchanan (b. September 17, 1800, Baltimore – d. May 11, 1874) was an officer in the United States Navy who became the only full admiral in the Confederate Navy during the American Civil War, and commanded the ironclad CSS Virginia. He was also the first Superintendent of th...
View More...

Rig for Church : The Thrilling Life Story of a Navy Chaplain. 3rd printing

From Sail to Steam : Recollections of Naval Life. First Edition

MAHAN, A.T. From Sail to Steam : Recollections of Naval Life. New York : Harper & Brothers, 1907. First Edition. Pp. (4),v-[xvii],(3),3-[326]. 8vo, navy blue cloth with gilt titles to front and spine, top edge gilt. Hattendorf & Hattendorf, A Bibliography of the Works of Alfred Thayer Mahan A13a. Mahan's autobiography, written during a period of illness in 1906 and 1907. Typically, the events of the author's life are viewed against the broad sweep of history, and of naval history in particular. Contents: 1. Naval Conditions Before the War of Secession -- The Officers and Seamen; 2. Naval Condi...
View More...

From Sail to Steam : Recollections of Naval Life. First Edition

Hattendorf & Hattendorf, A Bibliography of the Works of Alfred Thayer Mahan A13a.

Mahan's autobiography, written during a period of illness in 1906 and 1907. Typically, the events of the author's life are viewed against the broad sweep of history, and of naval history in particular.

1. Naval Conditions Before the War of Secession -- The Off...
View More...