1600 Years Under the Sea. Second Printing in dustjacket.

(ABCA). ABCA Coalition Operations Handbook, 11 April 2005. (Rosslyn, VA : The ABCA Program Office, 2005). Various paginations (totaling 290). 8vo, white card covers. “The American-British-Canadian-Australian (ABCA) Program isnot an alliance nor has an ABCA force ever been employed under the program . However, the ABCA nations have served together in ad hoc coalitions on several occasions to pursue common objectives. […] The COH [Coalition Operations Handbook] is designed to assist the ABCA nations in serving together inany coalitions, assist ABCA nations when they serve in a coalition with...
View More...

FETHNEY, Michael. The Absurd and the Brave : CORB - The True Account of theBritish Government's World War II Evacuation of Children Overseas. Sussex, England : The Book Guild Ltd., (1990). First Edition. Pp (6),7-333,(3). Wi th many b&w photos and other illustrations in the text . 8vo [140 x 220 mm], blue cloth, gilt lettering to spine. Michael Fethney (b. circa 1931), himself a CORB child evacuated at age 9 from Bradford, was living in Harrogateat the time of puiblication. "In June 1940, the CORB scheme (Children's Ov erseas Reception Board) opened its doors for the evacuation of Britain'...
View More...

O'BRIEN, Conor. Across Three Oceans. L: Granada, (1984). Pp 272. 8vo, ill. card covers. Later printing of Toy 453. Originally published in 1927. "On 20 June 1923, [O'Brien] left Dublin in the 20-ton Saoirse with a crew of twoand crossed the Atlantic to Pernambuco in Brazil, then on to Durban and ac ross the Indian Ocean to Melbourne. On the homeward passage he steered fromAuckland to Cape Horn and spent Christmas 1924 in the Falklands, which he describes in lively detail." -from the cover. Name, else vg. 10.00
View More...

Action at Sea : The Saga of the Sydney. US in dj

JOHNSTON, George H. Action at Sea : The Saga of the Sydney. With Illustrations. Bos.: Houghton Mifflin Co., 1942. Pp 185. 8vo, red cloth. Law 0293. "The story of the Australian Cruiser Sydney during seven months' war service with the British Mediterranean Fleet is unquestionably one of the most thrilling documents of the present war." - from the dj. Gift inscription, else vg in slightly chipped dj. 50.00
View More... 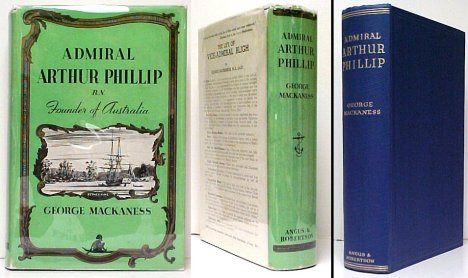 (PHILLIP, Arthur, Admiral). MACKANESS, George. Admiral Arthur Phillip : Founder of New South Wales, 1738-1814. Sydney: Angus & Robertson, 1937. Pp 536, frontis., [34] leaves plates. 8vo, blue cloth. "This volume has been planned as a companion volume to the author's 'Life of Vice-Admiral William Bligh.' It is based entirely upon original contemporary sources and is fully documented and illustrated. It is the result of several years' exhaustive research in Australia and Great Britain, and is a critical examination of all extant original material. Much of this is here published for the first...
View More...

PARRY, Ann (ed.). Admirals Fremantle. London : Chatto & Windus, 1971. FirstEdition. Pp 286, including frontis. + 22 pp of plates with 1 pp chart and several maps to text. 8vo, red cloth, gilt to spine. The four distinguishedAdmirals Fremantle who are the subject of this book are: "[...] Thomas Fra ncis Fremantle (1765-1819) who was a close friend of Nelson, and one of hiscaptains both at Copenhagen and Trafalgar. His son, Charles Howe Fremantle (1800-1869) had a major port in Australia named after him, and was Flag Of ficer in charge at Balaklava during the Crimean War. [...] His nephew, E...
View More...

RITCHIE, G.S. The Admiralty Chart : British Naval Hydrography in the Nineteenth Century. London : Hollis & Carter, (1967). First Printing. Pp [i]-xi,(1),[1]-388, frontis + 8 pp plates. Maps. Index. 8vo, grey cloth, gilt lettering to spine. "In this book, Rear Admiral Ritchie describes just what has lain behind the compilation of those charts- the organisation, the development of surveying techniques, the expeditions and above all the personalities. Drawing on his own experience as a naval surveyor as well as on the fullrange of the Admiralty archives, he conveys very clearly to the reader ...
View More...

KROHN, Gunter. The Adventures of Big Red. N.Y.: Vantage Press, (1977). First Edition. Pp (6),1-103,(3). Illustrated. 8vo, red cloth. "In April 1974 the author left his business and home in Canada... and set out... for Lunenburg, Nova Scotia. There he planned to build a boat in which he hoped to sailto Australia with his family. A year of planning afforded some success... The whole family... set sail along the North American coast. The remainder of the book recounts the many adventures of the family on board the Big Redas they struggled against the increasing cold of the incoming winter, hi...
View More...

KROHN, Gunter. The Adventures of Big Red. N.Y.: Vantage Press, (1977). Pp (6),1-103,(3). Illustrated. 8vo, red cloth. Not in Toy. "In April 1974 the author left his business and home in Canada... and set out... for Lunenburg,Nova Scotia. There he planned to build a boat in which he hoped to sail to Australia with his family. A year of planning afforded some success... The whole family... set sail along the North American coast. The remainder of the book recounts the many adventures of the family on board the Big Red asthey struggled against the increasing cold of the incoming winter, high ...
View More...

After Moruroa : France in the South Pacific. First Edition

"After Moruroa looks at the history of French colonialism in the Pacific - from the French Revolution to the Matignon Accords in New Caledonia and the end of nuclear testing at Moruroa and Fangataufa atolls.

What is the future for Frances Pacific colonies? As France integrates...
View More...

Albany : Port With A Past And Future : A History of the Port of Albany, King George Sound, Western Australia

JOHNSON, Les. Albany : Port With A Past And Future : A History of the Port of Albany, King George Sound, Western Australia. [Foreword by Terry Enright]. (Albany, W.A.: published by the Albany Port Authority, 1997). Pp. (8),9-328. Illustrated. 8vo, decorated orange and blue card covers with blue titles to front and spine. "A decision by the Albany Port Authority to publish this history in 1996 was doubly appropriate in marking the 70th anniversaryof legislation to establish an Albany harbour board and the 170 years sinc e the port became the site of the first European settlement in Western ...
View More...

HANRAHAN, Barbara. The Albatross Muff : A novel . London: Chatto & Windus, 1977. First UK Printing. Pp. (8),7-206,(2). 8vo, blue cloth with gilt lettering to spine. The third novel by the Australian author. "Stella leaves Australia as a young girl and comes with her widowed mother to live in London.The year is 1856. She makes friends with Edith Hall, whose father is aprop er English gentleman and a friend of the author Charles Dickens. Stella is jealously protexted by her old nurse,a former convict called Moak, whose powers of white magic turn into black as time passes and Stella changes i...
View More...

Along the Clipper Way. Fourth Printing in dustjacket

CHICHESTER, Francis. Along the Clipper Way. With extracts from Francis Drake, Shackleton, Slocum and Smeeton, Dana and Ann Davison, Bardiaux and BasilLubbock, Bullen, Bombard and Conor O'Brien, Anson, Dumas and Alan Villiers , John Masefield and Joseph Conrad. (London) : Hodder and Stoughton, (1967). Fourth Printing. Pp (12),[13-256. 8vo, blue cloth, gilt lettering to spine. With map end-papers. Toy 2731. "Francis Chichester's object in this bookis to take the readerr stage by stage along ^be great clipper way followed by the gold, wool and grain clippers from Britain round the Cape (of Go...
View More...

Shiva Naipaul (b. February 25, 1945 – d. August 13, 1985), born Shivadhar Srinivasa Naipaul in Port of Spain, Trinidad and Tobago, was a Trinidadian and British novelist and journalist.

An unfinished collection of essays by the Trinidad-born writer, published posthumously.

"He buries his hands in his pockets. "Is it like that in your island as ...
View More...