Wild Brier : or, Lays by an Untaught Minstrel.

RODGERS, Tony. Wild Game Cookbook. (Halifax, N.S.) : Nimbus Publishing, (1993). Pp (8),[ix]-xviii,[1]-110. 8vo, illustrated card covers, black spiral binding. "In this age of conservation, no wild meat should ever be wasted. Wild game is a nutritious and delicious food, which can be served as successiully to guests in the family dining room as to fellow hunters around the camp stove. Compiled by Tony Rodgers on behalf of the Nova Scotia Wildlite Federation, this book is written as a guide to hunters and cooks alike, andprovides important information for the succcessful preparation and cook...
View More...

TOWERS, Julie. Wildlife of Nova Scotia. [Halifax]: Nimbus Publishing Limited, (1995). Pp. (4),[1]-124. Illustrated. 8vo, ill. blue card covers. "This handy reference addresses popular questions and little-known facts about more than 70 species of wildlife, including where they live, what they eat (and what eats them), their life cycles, habits, and behaviour. Detailed illustrations will help you identify each species, while tables with facts about offspring and breeding seasons provide a glimpse of their migration and reproduction patterns." - from the rear cover. Vg. Due to its small ...
View More... 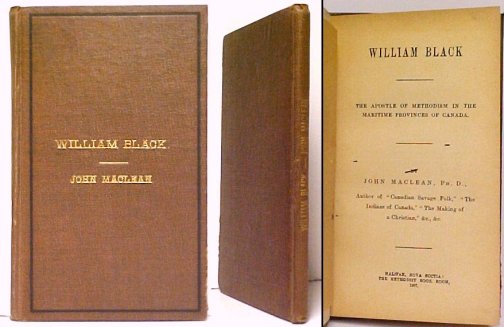 RITCHIE, Cicero T. The Willing Maid. London & New York : Abelard-Schuman, (1957). First Printing. Pp (6), 7-310, (2). 8vo, red cloth. Laugher p.478, Watters p.374, Rhodenizer p.796. Not in Tennyson, Cape Bretoniana "Cicero Ritchie was born at Halifax, Nova Scotia, in 1914. was born He attended the public schools of Dartmouth and Halifax, and spent his vacations camping in the woods and sailing the rockbound coasts of his native province. During his first vacation from Dalhousie University he worked in a shipyard, painting ships or scraping barnacles off their hulls. Later he directed a Boy...
View More...

Willing Maid. 1st US in dj

Includes:
"The Shanachie Man: A Train Rhythm. To Robert Norwood", beginning with the line, "On the road to Macaan" ,