Victorian Triumph And Other Poems.

View from the West: The Neolithic of the Irish Sea Zone. First Edition

CUMMINGS, Vicki. A View from the West: The Neolithic of the Irish Sea Zone.Oxford & Oakville : Oxbow Books, (2009). First Edition. Pp. (6),,[vii]-x,[ 1]-219,(3). With b&w photos and other illustrations in the text. Large 8vo,photo-illustrated cardcovers, light green spine. "At the heart of this stu dy are the early Neolithic chambered tombs of the Irish Sea zone, defined as west Wales, the west coast of northern Britain, coastal south and westernScotland, the western isles and the Isle of Man, and the eastern coast of Ireland. In order to understand these monuments, there must be a broader...
View More...

FORTE Forte, Richard ORAM, and Frederik PEDERSEN. Viking Empires. Cambridge: Cambridge University Press, (2005). Second Printing. Pp (6),vii-xiv,1-44 7,(3). With maps and illustrations in the text. 8vo, blue cloth, gold lettering to spine. "Viking Empires is a definitive new history of five hundred years of Viking civilisation and the first study of the global implicationsof the expansion, integration, and reorientation of the Viking World. From the first contact in the 790s, the book traces the political, military, so cial, cultural and religious history of the Viking Age from Iceland to ...
View More...

Violence and Civil Disturbances in Northern Ireland in 1969 : Report of the Tribunal Volume 2 (Appendices) 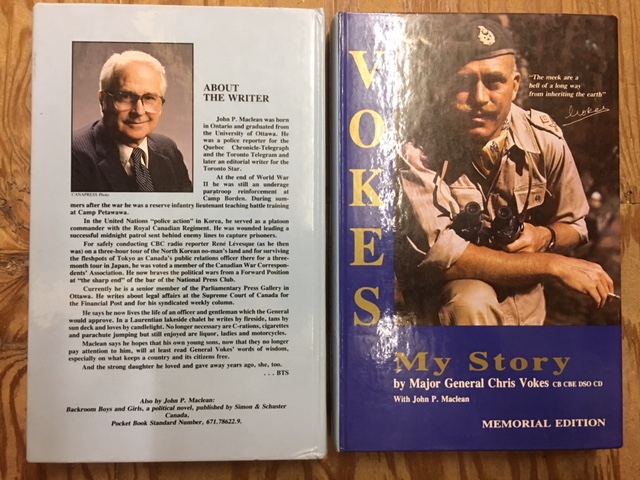 The wartime memoirs of Major General Vokes who commanded Canadian troops during the Second World War.

Voyage of the Brendan

SEVERIN, Timothy and Cotton COULSON. "The Voyage of the Brendan." An article in the National Geographic Magazine, Vol.152, No.6, December 1977. Pp 770-797. Illustrated with 17 photographs, and 2 diagrams. Includes map supplement "Colonization and Trade in the New World". Vg. 5.00
View More...

Voyage of the Naparima : A Story of Canada's Island Graveyard. First Edition

MANGAN, James J. The Voyage of the Naparima : A Story of Canada's Island Graveyard. (Ste-Foy, QC): Carraig Books, 1982. First Printing. Pp. (4),5-154,(6). Illustrated. 8vo, green lettering to white card covers. The journal ofGerald Keegan, an immigrant fleeing the Potato Famine in Ireland in the he ight of "Black '47", and his voyage aboard the bark Naparima, en route to Canada, and what was hoped to be a better life. Includes many references to the Atlantic Provinces. Gift inscription, else very good. 16.00
View More...

Voyage of the Naparima : A Story of Canada's Island Graveyard. pbk.

MANGAN, James J. The Voyage of the Naparima : A Story of Canada's Island Graveyard. (Ste-Foy, QC): Carraig Books, [1997, as per colophon]. Pp. (1)-154,[2]. Illustrated. 8vo, illustrated blue card covers. The journal of GeraldKeegan, an immgrant fleeing the Potato Famine in Ireland in the height of "Black '47", and his voyage aboard the bark Naparima, en route to Canada, and what was hoped to be a better life. Includes many references to the Atlantic Provinces. Vg. 15.00
View More...

Ó MAITIÚ, Séamas. W&R Jacob : Celebrating 150 Years of Irish Biscuit Making. (Dublin): The Woodfield Press, (2001). Pp. (10),[1]-121,(1). Illustrated.8vo, illustrated card covers with maroon spine, white lettering to spine. "The business was founded by two brothers of a Quaker family, William and Robert Jacob, in Waterford in 1851, and shortly afterwards moved to Peter's Row in Dublin. This, the first history of the enterprise, traces the originof the Jacob family in Ireland, the foundation and development of the firm , and its expansion overseas. The Dublin factory's dramatic involveme...
View More...

Wandering Under Sail. Revised and Enlarged Edition in dustjacket

HISCOCK, Eric C. Wandering Under Sail. Illustrated. London : The Rolls House Publishing Co., Ltd., (1948). Revised and Enlarged Edition. Pp [1]-215,(1), frontispiece + 13 leaves of plates. TeXt Illustrations and Maps. 8vo, blue cloth, gilt lettering to spine. Toy 0913. “Eric Hiscock, editor of The Yachting Year and a member of the Royal Cruising Club, has achieved considerable distinction for his single-handed cruises. In this book he tells of his adventures as a beginner, of the designing and building of his yacht Wanderer II, and of many experiences he has had in her and in three other wel...
View More...

Wandering Under Sail. US book club in dj.

HISCOCK, Eric C. Wandering Under Sail. New York: Oxford University Press, 1977. American Book Club Edition. Pp. [i]-xii,1-244. Illustrated. 8vo, blue cloth with gilt lettering to spine. "First published in 1939, ... [Wandering Under Sail] tells of [Hiscock's] adventures and mishaps as a novice single-handed yachtsman in cruises to Ireland, the west of Scotland, and Britanny, with a full account of the building of his yacht Wanderer II." - from the dj. Name tag to ffep, else vg in rubbed, nicked, clipped dj. 15.00
View More...

SIMMS, J.G. War and Politics in Ireland, 1649-1730. Edited by D.W. Hayton and Gerard O'Brien. London and Ronceverte : The Hambleton Press, (1984). First Printing. Pp. (8),[ix]-xxi,(1),[1]-335,(3), with a few illustrations to text. 8vo, navy blue cloth with gilt lettering to spine. "At few periods have events in Ireland been of such central political importance to the history of Britain as a whole as in the years following Cromwell's invasion in 1649 and the final defeat of the forces of James II in 1691. Even after 1691Ireland remained a real danger to English stability, a fact reflected i...
View More...

IRELAND, Bernard. The War in the Mediterranean 1940-1943. (London) : Leo Cooper (an imprint of Pen & Sword Books Ltd), (2004). Reprint of the 1993 edition. Pp (8),9-224 + 16-page central section of b&w photos. 3 maps in the text. 8vo, blue cloth, gilt lettering to spine. "For 1,000 days during the Second World War the Allied and Axis armies tougnt for the domination of theNorth African shores knowing that defeat would bring disastrous consequenc es. Much has been written about the conduct of the land battles and the commanders who faced each other yet, as the main protagonists realised at ...
View More...