Somewheres East of Suez : The incomparable Welsh storyteller sails to Thailand in a thirty-eight-foot trimaran. First American Edition in dustjacket. 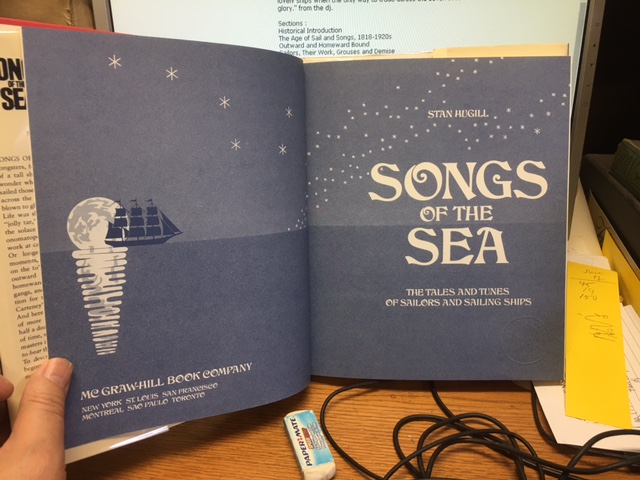 Songs of the Sea : The Tales and Tunes of Sailors and Sailing Ships. First American Edition in dustjacket

Stanley James Hugill (b. November 19, 1906, Hoylake, Cheshire – d. May 13, 1992, Aberystwyth, Wales) was a British folk music performer, artist and sea music historian, known as the "Last Working Shantyman" and described as the "20th century guardian of the tradition".

South Coast Cruising from the Thames to Penzance. With Charts and Sailing Directions. First Edition 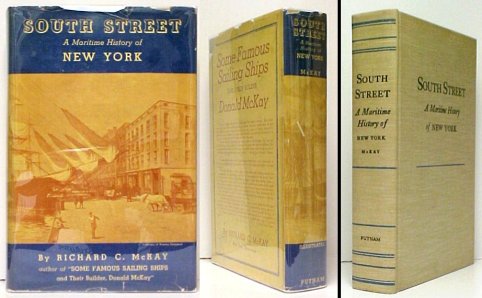 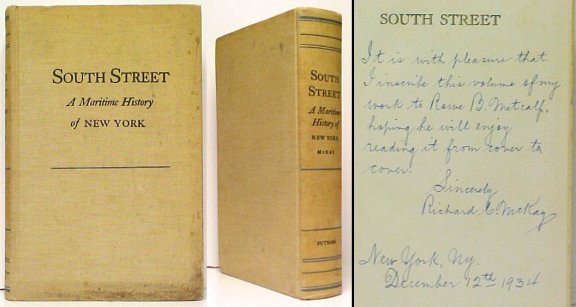 Written by the grandson ...
View More... 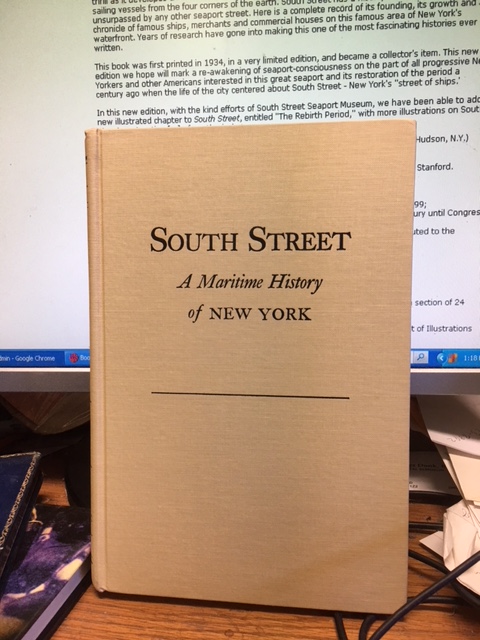 Written by the grandson of the great Donald McKay (and author of Some Famous Sailing Ships and Their Builder, Donald McKay), this exceedingly detailed history of the "Great Port" treats its social and economic history from the end of the American Revolution to the beginning of the Great War. W...
View More...

McKAY, Richard C. South Street : A Maritime History of New York. Riverside,Conn. : 7 C's Press, Inc., (1969). Second Revised Edition. Pp (6),vii-xxii i,(1),3-460,(26) + colour house signal flag frontispiece + illustration leaves. 8vo, tan cloth, black lettering to front and spine. Written by the grandson of the great Donald McKay (and author of Some Famous Sailing Ships and Their Builder, Donald McKay), this exceedingly detailed history of the "Great Port" treats its social and economic history from the end of the American Revolution to the beginning of the Great War. With a complete l...
View More...

South Street around 1900. : The Ships and Men of a Vanishing Way of Life photographed by Thomas W. Kennedy

Southampton : An Illustrated History. in dj.

RANCE, Adrian. Southampton : An Illustrated History. Southampton: MilestonePublications, (1986). Pp 192. Large 8vo, blue cloth. A history of the port form Roman through Medieval times, and to its golden age as the great ocea n liner terminal of the twentieth century. Also includes its contributions to aviation, with treatment of the Supermarine works at Woolston. Vg in spine-sunned dj. 45.00
View More... 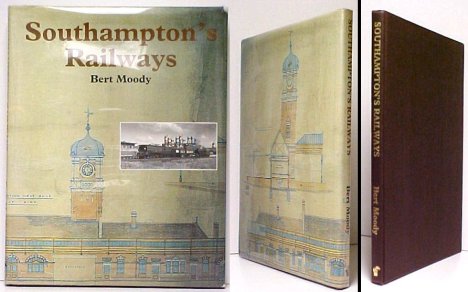 Southern Odyssey in search of a friend. First printing

PETCHEY, Helen. A Southern Odyssey in search of a friend. N.pl.: n.pub., 1992. First Printing. Pp (2),1-3,(3). Maps. 8vo (6 by 9 inches), illustrated pale blue stapled card covers. "Phillip Palmer built barques, brigs and schooners in his Dorchester shipyard alongside Palmer Creek. He and his brothers Hiram and Barlow saw their ships launched into the Creek ready to sail down Shepody Bay to ports around the world. Philip Jeremiah, shipbuilder andfarmer, having listened long to the tales of captains and crews, decided t o see for himself the places whereof they spoke. He would sail on ships he ...
View More...

LEWIS, Michael. Spithead : An Informal History. London: George Allen & Unwin, (1972). First Edition. Pp 208. Illustrated. 8vo, blue cloth. NMM V:41. Afine, impressionistic history of Spithead from its use as an anchorage in Roman times to its current status as a yacht harbour. The focus, however, is quite properly on the Royal Navy, including extended treatment of the great mutiny of 1797. Very good in dustjacket. 65.00
View More... 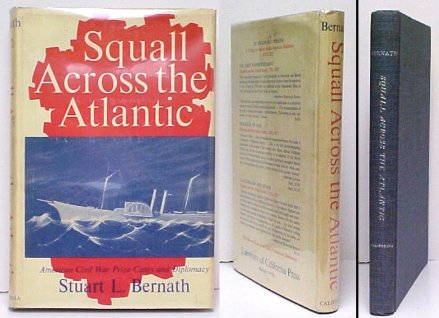 BERNATH, Stuart L. Squall Across the Atlantic : American Civil War Prize Cases and Diplomacy. Berkeley and Los Angeles : University of California Press, 1970. Pp x,229. 8vo, blue cloth. "Shortly after President Lincoln proclaimed a blockade of the Southern ports, the British government warned its subjects against violating either British or international law in derogation of their duty as neutrals. However, as Lord Russell reported, Englishmen would, if money were to be made by it, send supplies even to hell at the riskof burning their sails. When Union ships set out to seize the blocackad...
View More...

Square-Riggers on Schedule: The New York Sailing Packets to England, France, and the Cotton Ports. 1st no dj.

Stately Southerner. 1st US no dj

CLEMENTS, Rex. A Stately Southerner. With pen and ink sketches by A. Weston. Boston and N.Y.: Houghton Mifflin Company, 1926. First U.S. Edition. Printed in Great Britain. Pp (10),11- 191,(1),[i]-iii ("Opinions of the Press" on Clements' A Gipsy of the Horn), (1) Pagination includes the frontispieceand 5 other sketches by Weston. 8vo, blue cloth. Chapters : A Stately Sout herner - The First Watch, "The Ladies Gulf", "The Wide Ethiopian", The River of India, Valhalla, Lomitas, Landfall; "The Ports Desired": Umgeni River;The Island of Ascension; "Unto the Hill...
View More...

Steam Navigation on the Carolina Sounds and the Chesapeake in 1892

STANTON, Samuel Ward. Steam Navigation on the Carolina Sounds and the Chesapeake in 1892. Indexed and with a foreword by Alexander Crosby Brown. Salem, MA: The Steamship Historical Association of America, Peabody Museum, 1947. Pp. [i]-iv,[1]-31,(1). Illustrated. Double column. Large 8vo, printed stapled cream card covers. The Steamship Historical Society of America ReprintSeries number 4. Samuel Ward Stanton (b in New York on January 8, 1870) wa s a Titanic victim. "For his return to New York he boarded the Titanic at Cherbourg as a second-class passenger having travelled there from Paris....
View More...

By: TALBOT, Frederick A.

TALBOT, Frederick A. Steamship Conquest of the World. Illustrated. Philadelphia : J.B. Lippincott, Company, n.d. [Preface dated 1912]. Pp (4),v-xii,1-344, frontispiece + 94 pp.plates. Maps in text. 8vo, blue cloth with elaborate illustration to front, silver lettering to front and spine. In the Conquests of Science series. Contents : 1. The Coming of the Big Ship; 2. The Birth of a Steamship [much on the Lusitania and the Mauretania]; 3. The Construction of a Steamship; 4. The Propelling Machinery; 5. The Launch and Trial Trip; 6. The Luxury of the Modern Liner; 7. Safety at Sea [lifeboats, da...
View More...

Steel of Empire : The Romantic History of the Canadian Pacific, the Northwest Passage of Today. First American Edition in dustjacket.

PARSONS, Richard. The Story of Kings : C.J. King & Sons, 1850 to the Present Day. (Bristol) : White Tree Books, (1988). Pp. (3),4-120. Illustrated. Square 8vo, blue cloth. "In the 1840s, Christopher King left his birthplace in the village of Chiseldon, Wiltshire to seek work in Bristol. By 1850, at the age of twenty-three, he was a master stevedore, laying the foundations of the family business which was to dominate the stevedoring and tug-owningscene in Bristol city docks for the next century." - from the dj. Chapters : 1. Early Years; 2. A Family Firm; 3. In War and Peace; 4. The Mod...
View More... 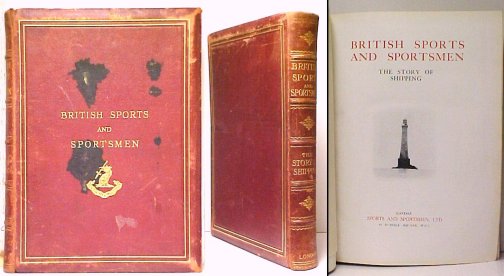